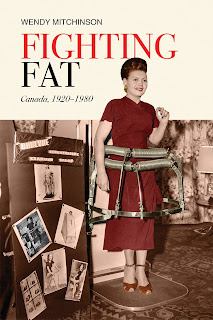 
While the statistics for obesity have been alarming in the twenty-first century, concern about fatness has a history. In Fighting Fat, Wendy Mitchinson discusses the history of obesity and fatness from 1920 to 1980 in Canada. Through the context of body, medicine, weight measurement, food studies, fat studies, and the identity of those who were fat, Mitchinson examines the attitudes and practices of medical practitioners, nutritionists, educators, and those who see themselves as fat.

Fighting Fat analyzes a number of sources to expose our culture’s obsession with body image. Mitchinson looks at medical journals, both their articles and the advertisements for drugs for obesity, as well as magazine articles and advertisements, including popular "before and after" weight loss stories. Promotional advertisements reveal how the media encourages negative attitudes towards body fat. The book also includes over 30 interviews with Canadians who defined themselves as fat, highlighting the emotional toll caused by the stigmatizing of fatness.
Publié par Alexandre Klein à 06:06