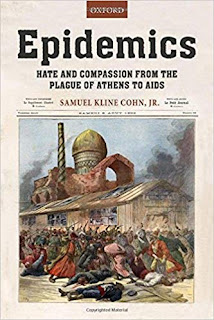 Epidemics: Hate and Compassion from the Plague of Athens to AIDS

By investigating thousands of descriptions of epidemics reaching back before the fifth-century-BCE Plague of Athens to the distrust and violence that erupted with Ebola in 2014, Epidemics challenges a dominant hypothesis in the study of epidemics, that invariably across time and space, epidemics provoked hatred, blaming of the "other", and victimizing bearers of epidemic diseases, particularly when diseases were mysterious, without known cures or preventive measures, as with AIDS during the last two decades of the twentieth century.

However, scholars and public intellectuals, especially post-AIDS, have missed a fundamental aspect of the history of epidemics. Instead of sparking hatred and blame, this study traces epidemics' socio-psychological consequences across time and discovers a radically different picture: that epidemic diseases have more often unified societies across class, race, ethnicity, and religion, spurring self-sacrifice and compassion.
Publié par Alexandre Klein à 06:06