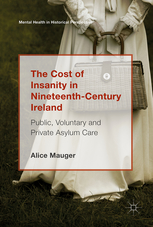 The Cost of Insanity in Nineteenth-Century Ireland. Public, Voluntary and Private Asylum Care

This open access book is the first comparative study of public, voluntary and private asylums in nineteenth-century Ireland. Examining nine institutions, it explores whether concepts of social class and status and the emergence of a strong middle class informed interactions between gender, religion, identity and insanity. It questions whether medical and lay explanations of mental illness and its causes, and patient experiences, were influenced by these concepts. The strong emphasis on land and its interconnectedness with notions of class identity and respectability in Ireland lends a particularly interesting dimension. The book interrogates the popular notion that relatives were routinely locked away to be deprived of land or inheritance, querying how often “land grabbing” Irish families really abused the asylum system for their personal economic gain. The book will be of interest to scholars of nineteenth-century Ireland and the history of psychiatry and medicine in Britain and Ireland.
Publié par Alexandre Klein à 06:01