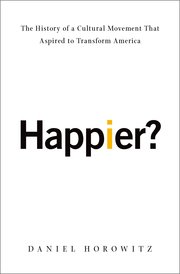 Happier? The History of a Cultural Movement That Aspired to Transform America

When a cultural movement that began to take shape in the mid-twentieth century erupted into mainstream American culture in the late 1990s, it brought to the fore the idea that it is as important to improve one's own sense of pleasure as it is to manage depression and anxiety. Cultural historian Daniel Horowitz's research reveals that this change happened in the context of key events. World War II, the Holocaust, post-war prosperity, the rise of counter-culture, the crises of the 1970s, the presidency of Ronald Reagan, and the prime ministerships of Margaret Thatcher and David Cameron provided the important context for the development of the field today known as positive psychology.

Happier? provides the first history of the origins, development, and impact of the way Americans -- and now many around the world -- shifted from mental illness to well-being as they pondered the human condition. This change, which came about from the fusing of knowledge drawn from Eastern spiritual traditions, behavioral economics, neuroscience, evolutionary biology, and cognitive psychology, has been led by scholars and academic entrepreneurs, as they wrestled with the implications of political events and forces such as neoliberalism and cultural conservatism, and a public eager for self-improvement.

Linking the development of happiness studies and positive psychology with a broad series of social changes, including the emergence of new media and technologies like TED talks, blogs, web sites, and neuroscience, as well as the role of evangelical ministers, Oprah Winfrey's enterprises, and funding from government agencies and private foundations, Horowitz highlights the transfer of specialized knowledge into popular arenas. Along the way he shows how marketing triumphed, transforming academic disciplines and spirituality into saleable products. Ultimately, Happier? illuminates how positive psychology, one of the most influential academic fields of the late twentieth and early twenty-first centuries, infused American culture with captivating promises for a happier society.
Publié par Alexandre Klein à 06:01