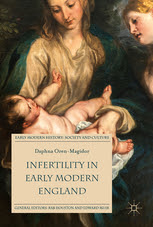 This book explores the experiences of people who struggled with fertility problems in sixteenth and seventeenth-century England. Motherhood was central to early modern women’s identity and was even seen as their path to salvation. To a lesser extent, fatherhood played an important role in constructing proper masculinity. When childbearing failed this was seen not only as a medical problem but as a personal emotional crisis. Infertility in Early Modern England highlights the experiences of early modern infertile couples: their desire for children, the social stigmas they faced, and the ways that social structures and religious beliefs gave meaning to infertility. It also describes the methods of treating fertility problems, from home-remedies to water cures. Offering a multi-faceted view, the book demonstrates the centrality of religion to every aspect of early modern infertility, from understanding to treatment. It also highlights the ways in which infertility unsettled the social order by placing into question the gendered categories of femininity and masculinity.
Publié par Alexandre Klein à 06:02