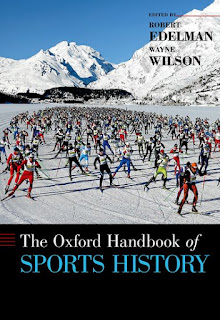 The Oxford Handbook of Sports History

Orwell was wrong. Sports are not "war without the shooting", nor are they "war by other means." To be sure sports have generated animosity throughout human history, but they also require rules to which the participants agree to abide before the contest. Among other things, those rules are supposed to limit violence, even death. More than anything else, sports have been a significant part of a historical "civilizing process." They are the opposite of war.

As the historical profession has taken its cultural turn over the last few decades, scholars have turned their attention to subject once seen as marginal. As researchers have come to understand the centrality of the human body in human history, they have come to study this most corporeal of human activities. Taking early cues from physical educators and kinesiologists, historians have been exploring sports in all their forms in order to help us answer the most fundamental questions to which scholars have devoted their lives. We have now seen a veritable explosion excellent work on this subject, just as sports have assumed an even greater share of a globalizing world's cultural, political and economic space. Practiced by millions and watched by billions, sports provide an enormous share of content on the Internet. This volume combines the efforts of sports historians with essays by historians whose careers have been devoted to more traditional topics. We want to show how sports have evolved from ancient societies to the world we inhabit today. Our goal is to introduce those from outside this sub-field to this burgeoning body of scholarship. At the same time, we hope here to show those who may want to study sport with rigor and nuance how to embark on a rewarding journey and tackle profound matters that have affected and will affect all of humankind.
Publié par Alexandre Klein à 06:05