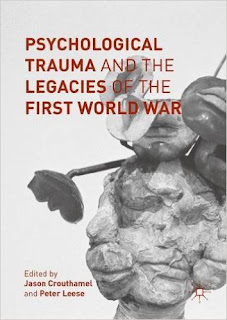 Psychological Trauma and the Legacies of the First World War

This transnational, interdisciplinary study of traumatic neurosis moves beyond the existing histories of medical theory, welfare, and symptomatology. The essays explore the personal traumas of soldiers and civilians in the wake of the First World War; they also discuss how memory and representations of trauma are transmitted between patients, doctors and families across generations. The book argues that so far the traumatic effects of the war have been substantially underestimated. Trauma was shaped by gender, politics, and personality. To uncover the varied forms of trauma ignored by medical and political authorities, this volume draws on diverse sources, such as family archives and narratives by children of traumatized men, documents from film and photography, memoirs by soldiers and civilians. This innovative study challenges us to re-examine our approach to the complex psychological effects of the First World War.

Part I Battles over Representations and Perceptions of Traumatized Men

Part II Traumatized Civilians in the Wake of the Great War

Ch. 5 Violence, Trauma and Memory in Ireland: The Psychological Impact of War and Revolution on a Liminal Society, 1916–1923
Justin Dolan Stover

Ch. 6 Gender, Memory and the Great War: The Politics of War Victimhood in Interwar Germany
Silke Fehlemann and Nils Löffelbein

Ch. 7 Subjectivities in the Aftermath: Children of Disabled Soldiers in Britain After the Great War
Michael Roper

Ch. 10 “Everything Ruined, Which Seemed Most Stable in the World…”: The German Medical Profession, the First World War and the Road to the “Third Reich”
Livia Prüll

Part IV A Coda on Trauma