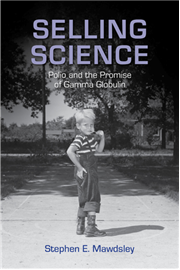 Selling Science: Polio and the Promise of Gamma Globulin

Today, when many parents seem reluctant to have their children vaccinated, even with long proven medications, the Salk vaccine trial, which enrolled millions of healthy children to test an unproven medical intervention, seems nothing short of astonishing. In Selling Science, medical historian Stephen E. Mawdsley recounts the untold story of the first large clinical trial to control polio using healthy children—55,000 healthy children—revealing how this long-forgotten incident cleared the path for Salk’s later trial.

Mawdsley describes how, in the early 1950s, Dr. William Hammon and the National Foundation for Infantile Paralysis launched a pioneering medical experiment on a previously untried scale. Conducted on over 55,000 healthy children in Texas, Utah, Iowa, and Nebraska, this landmark study assessed the safety and effectiveness of a blood component, gamma globulin, to prevent paralytic polio. The value of the proposed experiment was questioned by many prominent health professionals as it harbored potential health risks, but as Mawdsley points out, compromise and coercion moved it forward. And though the trial returned dubious results, it was presented to the public as a triumph and used to justify a federally sanctioned mass immunization study on thousands of families between 1953 and 1954. Indeed, the concept, conduct, and outcome of the GG study were sold to health professionals, medical researchers, and the public at each stage. At a time when most Americans trusted scientists, their mutual encounter under the auspices of conquering disease was shaped by politics, marketing, and at times, deception.