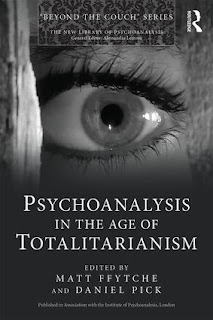 Psychoanalysis in the Age of Totalitarianism

Psychoanalysis in the Age of Totalitarianism provides rich new insights into the history of political thought and clinical knowledge. In these chapters, internationally renowned historians and cultural theorists discuss landmark debates about the uses and abuses of ‘the talking cure’ and map the diverse psychologies and therapeutic practices that have featured in and against tyrannical, modern regimes.

These essays show both how the Freudian movement responded to and was transformed by the rise of fascism and communism, the Second World War, and the Cold War, and how powerful new ideas about aggression, destructiveness, control, obedience and psychological freedom were taken up in the investigation of politics. They identify important intersections between clinical debate, political analysis, and theories of minds and groups, and trace influential ideas about totalitarianism that took root in modern culture after 1918, and still resonate in the twenty-first century. At the same time, they suggest how the emergent discourses of ‘totalitarian’ society were permeated by visions of the unconscious.

Topics include: the psychoanalytic theorizations of anti-Semitism; the psychological origins and impact of Nazism; the post-war struggle to rebuild liberal democracy; state-funded experiments in mind control in Cold War America; coercive ‘re-education’ programmes in Eastern Europe, and the role of psychoanalysis in the politics of decolonization. A concluding trio of chapters argues, in various ways, for the continuing relevance of psychoanalysis, and of these mid-century debates over the psychology of power, submission and freedom in modern mass society.

Psychoanalysis in the Age of Totalitarianism will prove compelling for both specialists and readers with a general interest in modern psychology, politics, culture and society, and in psychoanalysis. The material is relevant for academics and post-graduate students in the human, social and political sciences, the clinical professions, the historical profession and the humanities more widely.
Publié par Alexandre Klein à 06:18