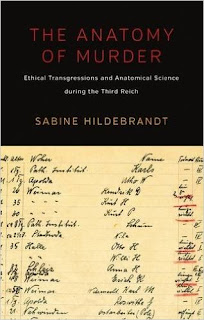 The Anatomy of Murder: Ethical Transgressions and Anatomical Science During the Third Reich

Of the many medical specializations to transform themselves during the rise of National Socialism, anatomy has received relatively little attention from historians. While politics and racial laws drove many anatomists from the profession, most who remained joined the Nazi party, and some helped to develop the scientific basis for its racialist dogma. As historian and anatomist Sabine Hildebrandt reveals, however, their complicity with the Nazi state went beyond the merely ideological. They progressed through gradual stages of ethical transgression, turning increasingly to victims of the regime for body procurement, as the traditional model of working with bodies of the deceased gave way, in some cases, to a new paradigm of experimentation with the "future dead."
Publié par Alexandre Klein à 06:01