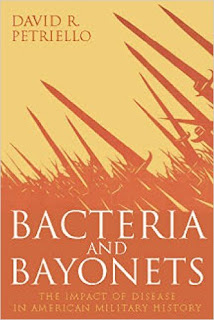 Bacteria and Bayonets: The Influence of Disease in American Military History

For hundreds of years men have fought and died to expand and protect the United States relying on martial skill and patriotism. Various powerful enemies, from the British to the Nazis, and legendary individuals including Tecumseh and Robert E. Lee have all fallen before the arms of the American soldier. Yet the deadliest enemy faced by the nation, one which killed more soldiers than all of its foes combined, has been both unrecognized and unseen. The war waged by the United States against disease, and by disease against the United States, has impacted the country more than any other conflict and continues to present a terrible threat to this day.

Illness has been more than just a historical cause of casualties for the American military, in numerous wars it has helped to decide battles, drive campaigns, and determine strategy. In fact the Patriots owed pestilence as much for their victory in the Revolution as they did their own force of arms. Likewise disease helped to prevent the conquest of Canada in 1812, drove strategy in the Mexican War, handicapped Lee’s 1862 advance, and helped lead to World War II. Disease also provided an edge in the wars against Native Americans, yet just as soon turned on the US when unacclimated US troops were dispatched to the southern Pacific.

This book not only traces the path of disease in American military history but also recounts numerous small episodes and interesting anecdotes related to the history of illness. Overall it presents a compelling story, one that has been overlooked and under appreciated. Yellow fever, malaria, tuberculosis, glanders, bubonic plague, smallpox, and numerous other bacteria and viruses all conspired to defeat America, and are enemies that need to be recognized.
Publié par Alexandre Klein à 06:10