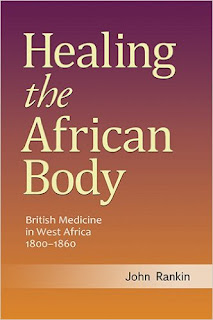 This timely book explores the troubled intertwining of religion, medicine, empire, and race relations in the early nineteenth century. John Rankin analyzes the British use of medicine in West Africa as a tool to usher in a “softer” form of imperialism, considers how British colonial officials, missionaries, and doctors regarded Africans, and explores the impact of race classification on colonial constructs.

Rankin goes beyond contemporary medical theory, examining the practice of medicine in colonial Africa as Britons dealt with the challenges of providing health care to their civilian employees, African soldiers, and the increasing numbers of freed slaves in the general population, even while the imperialists themselves were threatened by a lack of British doctors and western medicines. As Rankin writes, “The medical system sought to not only heal Africans but to ‘uplift’ them and make them more amenable to colonial control . . . Colonialism starts in the mind and can be pushed on the other solely through ideological pressure.”
Publié par Alexandre Klein à 06:01