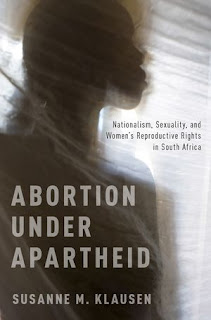 Abortion Under Apartheid traces the criminalization of abortion in South Africa during the apartheid era (1948-1990), the emergence of a flourishing clandestine abortion industry, and 1975 passage of the country's first statutory law on abortion. The book examines the politics of sexuality, racism and nationalism in apartheid culture, arguing that the authoritarian National Party Government regulated white women's reproductive sexuality in the interests of maintaining white supremacy. One major focus is the battle that erupted in the late 1960s when doctors and feminists called for liberalization of the colonial-era laws criminalizing abortion. The movement for abortion law reform spurred a variety of political, social and religious groups to grapple with the meaning of abortion in the context of changing ideas about the traditional family and women's place within it. Abortion Under Apartheid shows that all women, regardless of race, were oppressed under apartheid. Yet, although the National Party was preoccupied with denying young white women reproductive control, black women bore the brunt of the lack of access to safe abortion, suffering the effects of clandestine abortion on a shocking scale in urban centers around the country.

At the heart of the story are the black and white girls and women who -- regardless of hostility from partners, elders, religious institutions, nationalist movements, conservative doctors and nurses, or the racist regime -- persisted in determining their own destinies. Although a great many were harmed and even died as a result of being denied safe abortion, many more succeeded in thwarting opponents of women's right to control their capacity to bear children. This book conveys both the tragic and triumphant sides of their story.