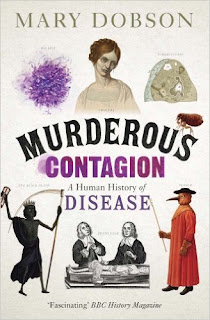 Disease is the true serial killer of human history: the horrors of bubonic plague, cholera, syphilis, smallpox, tuberculosis and the like have claimed more lives and caused more misery than the depredations of warfare, famine and natural disasters combined.

Murderous Contagion tells the compelling and at times unbearably moving story of the devastating impact of diseases on humankind - from the Black Death of the 14th century to the Spanish flu of 1918-19 and the AIDS epidemic of the modern era. In this book Mary Dobson also relates the endeavours of physicians and scientists to understand and identify the causes of diseases and find ways of preventing them.

This is a timely and revelatory work of popular history by a writer whose knowledge of, and enthusiasm for, her subject shines through her every word.
Publié par Alexandre Klein à 06:33