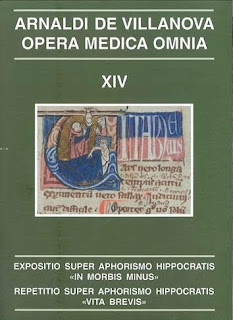 
This latest volume to be published in the collected medical writings of Arnau de Vilanova provides editions, with introductions and indexes to words and sources, to his two surviving commentaries on individual Hippocratic aphorisms (unlike some of his Montpellier contemporaries, he seems not to have produced a commentary or set of questiones on the Aphorisms as a whole) . His commentary on “In morbis minus” (Aph. II.34), composed in the mid-1290s, was apparently driven by an early belief that the aphorism encapsulated a general rule for an aspect of medical practice; the text does not survive in manuscript and is edited here from its Renaissance editions. The accompanying edition of his commentary on “Vita brevis” (Aph. I.1), which he finished in 1301, uses manuscript sources to correct the text given in the various sixteenth-century collections of his Opera, which scholars until now have automatically used without recognizing that a fifth of Arnau’s original had been intentionally discarded by a later bored scribe, and another ten percent replaced by a very long passage from Avicenna’s Metaphysics! The restored complete text is of great interest, especially for Arnau’s detailed, almost step-by-step account of how a physician should deal with a new patient, moving through the stages of diagnosis to those of therapeutic prescription (he was delivering the commentary, of course, to his students at Montpellier). And it shows, too, how his conviction that general rules were possible in medicine had weakened since he had prepared his commentary on II.34, and that he had come to realize that the contingent factors which make each case an individual one were of equally great importance to a physician.
Publié par Alexandre Klein à 06:39