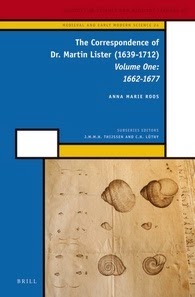 Edited and Translated by Anna Marie Roos, University of Lincoln


Martin Lister (1639–1712) was a consummate virtuoso, the first arachnologist and conchologist, and a Royal physician. As one of the most prominent corresponding fellows of the Royal Society, many of Lister’s discoveries in natural history, archaeology, medicine, and chemistry were printed in the Philosophical Transactions. Lister corresponded extensively with explorers and other virtuosi such as John Ray, who provided him with specimens, observations, and locality records from Jamaica, America, Barbados, France, Italy, the Netherlands, and his native England. This volume of ca. 400 letters (one of three), consists of Lister’s correspondence dated from 1662 to 1677, including his time as a Cambridge Fellow, his medical training in Montpellier, and his years as a practicing physician in York.
Publié par Alexandre Klein à 06:04