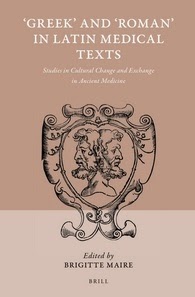 'Greek' and 'Roman' in Latin Medical Texts. Studies in Cultural Change and Exchange in Ancient Medicine

Latin medical texts transmit medical theories and practices that originated mainly in Greece. This interaction took place through juxtaposition, assimilation and transformation of ideas. 'Greek' and 'Roman' in Latin Medical Texts studies the ways in which this cultural interaction influenced the development of the medical profession and the growth of knowledge of human and animal bodies, and especially how it provided the foundations for innovations in the areas of anatomy, pathology and pharmacology, from the earliest Latin medical texts until well into the medieval world.
Publié par Alexandre Klein à 10:26