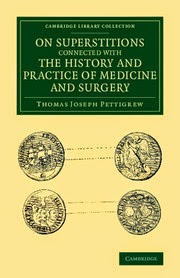 The surgeon Thomas Pettigrew (1791-1865) was interested in all aspects of antiquity, and gained fame in London society through his mummy-unwrapping parties. (His History of Egyptian Mummies is also reissued in the Cambridge Library Collection.) His interest in the early history of medicine is evidenced by this work, published in 1844, which describes the various forms of superstition which the science of medicine had always attracted since ancient times. Pettigrew considers alchemy and astrology, and the use of talismans, amulets and charms, as well as the history of Egyptian, Greek and Roman medicine, and some modern developments, including 'sympathetical cures' and the rejoining of severed fingers and ears. A chapter is devoted to the belief in the efficacy of the 'royal touch' against the King's Evil (scrofula), and another to the seventeenth-century faith healer Valentine Greatrakes, of whose alleged cures Pettigrew takes a robustly sceptical view.
Publié par Alexandre Klein à 07:31