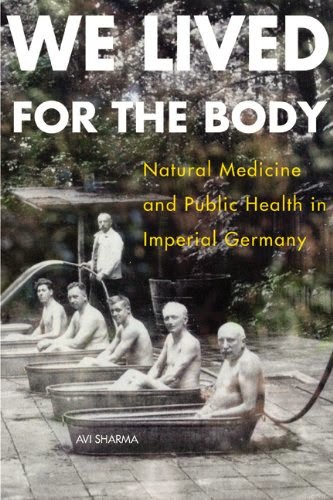 We Lived for the Body: Natural Medicine and Public Health in Imperial Germany

Nature was central to the Wilhelmine German experience. Medical cosmologies and reform-initiatives were a key to consumer practices and lifestyle choices. Nature's appeal transcended class, confession, and political party. Millions of Germans recognized that nature had healing effects and was intimately tied to quality of life. In the 1880s and 1890s, this preoccupation with nature became an increasingly important part of German popular culture.

In this pioneering study, Avi Sharma shows that nature, health, and the body became essential ways of talking about real and imagined social and political problems. The practice of popular medicine in the Wilhelmine era brought nature back into urban everyday experience, transforming the everyday lives of ordinary citizens. Sharma explores the history of natural healing in Germany and shows how social and medical practices that now seem foreign to contemporary eyes were, just decades ago, familiar to everyone from small children to their aged grandparents, from tradesmen and women to research scientists. Natural healing was not simply a way to cure illness. It was also seen as a way to build a more healthful society. Using interpretive methods drawn from the history of science and science studies, Sharma provides a readable and groundbreaking inquiry into how popular health and hygiene movements shaped German ideas about progress, modernity, nature, health, and the body at the end of the 19th and the beginning of the 20th century.
Publié par Alexandre Klein à 07:14