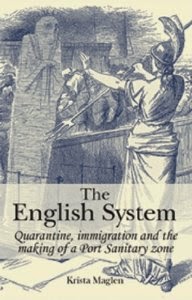 The English System: Quarantine, Immigration and the Making of a Port Sanitary Zone


The English System is a history of port health and immigration at a critical moment of transformation at the end of the nineteenth and beginning of the twentieth century. During the later nineteenth century British public health officials transformed the medieval quarantine system into a novel 'English system' of surveillance to control the introduction of infectious disease. This removed the much maligned hindrances of quarantine to high-speed international commerce and for maritime traffic through Britain's ports. At the same time calls were made to restrict the arrival of increasing numbers of European immigrants and transmigrants. This book explores the tensions and transition in the regulation of port health from a paradigm focused on the origin of disease to one which converged on the origin of the diseased.
Publié par Alexandre Klein à 06:47