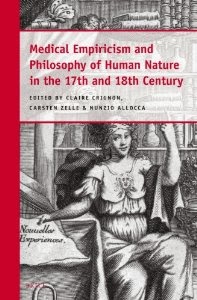 
The contributions gathered in this volume endeavour to evaluate the role played by medical empiricism in the emergence of a philosophy of human nature in the 17th century and the role played by philosophical anthropology in the 18th century. Divided into three parts, “1. The Dispute between Metaphysics and Empiricism”, “2. Arts of Empirical Research,” and “3. Relevance of Case Studies,” the volume questions the position of medicine within so-called “natural philosophy”, which encompasses physiology and anatomy, as well as physics, astronomy and chemistry. One of its aims is to understand the tension between the goals pursued by the “natural philosopher” and the objectives set by the "physician". Within natural philosophy, the primary goal is to know nature, the body and the living, and this knowledge implies an effort to understand the causes of natural phenomena. For the physician, on the other hand, the primary goal is to cure the patients’ bodies that are presented to him.
Contributors include: Claire Crignon, Claire Etchegaray, Guido Giglioni, Domenico Berto Meli, Anne-Lise Rey, Yvonne Wübben, and Carsten Zelle.
Publié par Alexandre Klein à 07:14