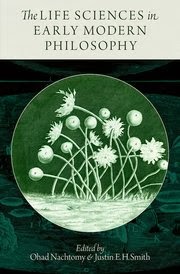 The present volume advances a recent historiographical turn towards the intersection of early modern philosophy and the life sciences by bringing together many of its leading scholars to present the contributions of important but often neglected figures, such as Ralph Cudworth, Nehemiah Grew, Francis Glisson, Hieronymus Fabricius ab Aquapendente, Georg Ernst Stahl, Juan Gallego de la Serna, Nicholas Hartsoeker, Henry More, as well as more familiar figures such as Descartes, Spinoza, Leibniz, Malebranche, and Kant.


The contributions to this volume are organized in accordance with the particular problems that living beings and living nature posed for early modern philosophy: the problem of life in general, whether it constitutes something ontologically distinct at all, or whether it can ultimately be exhaustively comprehended "in the same manner as the rest"; the problem of the structure of living beings, by which we understand not just bare anatomy but also physiological processes such as irritability, motion, digestion, and so on; the problem of generation, which might be included alongside digestion and other vital processes, were it not for the fact that it presented such an exceptional riddle to philosophers since antiquity, namely, the riddle of coming-into-being out of -- apparent or real -- non-being; and, finally, the problem of natural order.
Publié par Alexandre Klein à 06:47