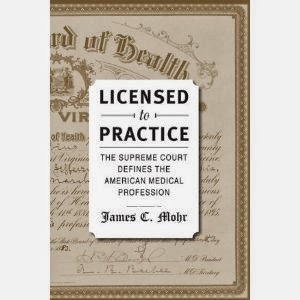 Licensed to Practice begins with an 1891 shooting in Wheeling, West Virginia, that left one doctor dead and another on trial for his life. Formerly close friends, the doctors had fallen out over the issue of medical licensing. Historian James C. Mohr calls the murder "a sorry personal consequence of the far larger and historically significant battle among West Virginia's physicians over the future of their profession." Through most of the nineteenth century, anyone could call themselves a doctor and could practice medicine on whatever basis they wished. But an 1889 U.S. Supreme Court case, Dent v. West Virginia, effectively transformed medical practice from an unregulated occupation to a legally recognized profession. The political and legal battles that led up to the decision were unusually bitter - especially among physicians themselves - and the outcome was far from a foregone conclusion. So-called Regular physicians wanted to impose their own standards on the wide-open medical marketplace in which they and such non-Regulars as Thomsonians, Botanics, Hydropaths, Homeopaths, and Eclectics competed. The Regulars achieved their goal by persuading the state legislature to make it a crime for anyone to practice without a license from the Board of Health, which they controlled. When the high court approved that arrangement - despite constitutional challenges - the licensing precedents established in West Virginia became the bedrock on which the modern American medical structure was built. And those precedents would have profound implications. Thus does Dent, a little-known Supreme Court case, influence how Americans receive health care more than a hundred years after the fact.
Publié par Alexandre Klein à 07:36