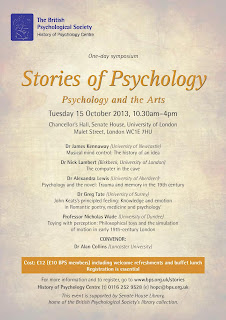 ‘Stories of Psychology’ Symposium
Psychology and the Arts

This year’s theme will reflect some of the many ways that the arts (music, literature, visual arts) have influenced the development of psychological understanding and vice versa.

Speakers:
Dr Alexandra Lewis (University of Aberdeen)
‘Psychology and the novel: Trauma and memory in the 19th century’

Professor Nicholas Wade (University of Dundee)
‘Toying with perception: Philosophical toys and the simulation of motion in early 19th-century London’

Dr Nick Lambert (Birkbeck, University of London)
‘The computer in the cave’

This is a public event and all are welcome. The programme has been designed to have general appeal as well as academic validity for historians of psychology.