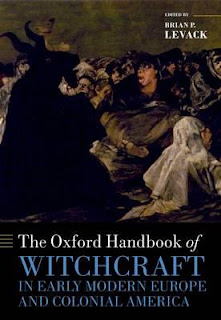 
The essays in this Handbook, written by leading scholars working in the rapidly developing field of witchcraft studies, explore the historical literature regarding witch beliefs and witch trials in Europe and colonial America between the early fifteenth and early eighteenth centuries. During these years witches were thought to be evil people who used magical power to inflict physical harm or misfortune on their neighbours. Witches were also believed to have made pacts with the devil and sometimes to have worshipped him at nocturnal assemblies known as sabbaths. These beliefs provided the basis for defining witchcraft as a secular and ecclesiastical crime and prosecuting tens of thousands of women and men for this offence. The trials resulted in as many as fifty thousand executions.

These essays study the rise and fall of witchcraft prosecutions in the various kingdoms and territories of Europe and in English, Spanish, and Portuguese colonies in the Americas. They also relate these prosecutions to the Catholic and Protestant reformations, the introduction of new forms of criminal procedure, medical and scientific thought, the process of state-building, profound social and economic change, early modern patterns of gender relations, and the wave of demonic possessions that occurred in Europe at the same time. The essays survey the current state of knowledge in the field, explore the academic controversies that have arisen regarding witch beliefs and witch trials, propose new ways of studying the subject, and identify areas for future research.
Publié par Alexandre Klein à 06:08