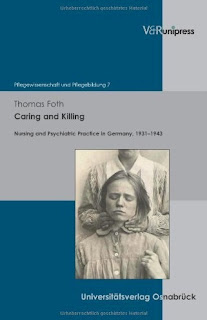 Caring and Killing
Nursing and Psychiatric Practice in Germany, 1931-1943


Thomas Foth is an assistant professor at the School of Nursing in the Faculty of Health Sciences at the University of Ottawa.

Under the Nazi regime in Germany a calculated killing of chronic mentally ill patients took place. Nurses executed this program in their everyday practice. However, suspicions have been raised that psychiatric patients were also assassinated before and after the Nazi regime, suggesting that the motives for these killings must be investigated within psychiatric practice itself. This book highlights the mechanisms and scientific discourses in place that allowed nurses to perceive patients as unworthy of life. This study analyzes patient records as inscriptions that actively intervene in interactions in institutions and that create a specific reality on their own accord. The question is not whether the reality represented within the documents is true, but rather how documents worked in institutions and what their effects were. It is shown how nurses were actively involved in the construction of patients identities and how these documentary identities led to the death of thousands of humans.
Publié par Alexandre Klein à 08:00