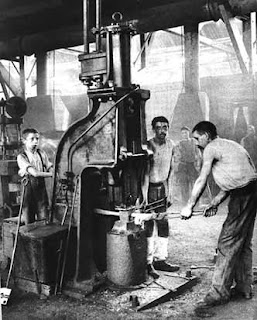 May 15th. At 5pm
Northumbria University
theatre 031 of the Lipman Building

Before the mid-nineteenth century, ideas about the relationship between the human body and the industrial workplace were rooted largely in theoretical medical opinions and were rarely informed by empirical observation. Most early medical commentaries on the ailments of industrial occupations were
also influenced profoundly by the theories of early authorities such as Ramazzini who ascribed workplace ailments to influences such as harmful vapours, raw materials and unfavourable ergonomics. Medical witnesses to early industrial inquiries seized upon ergonomics to explain skeletal deformities amongst child workers in factories. It was argued that unusual postures and long periods of standing in factories led to widespread skeletal distortion and disabilities. In coalmining, widespread short stature and distinctive body shapes were ascribed similarly to constrained working positions and the influence of heredity. This public lecture discusses how industrial influences upon physical growth and development were reported in the early nineteenth century and suggests that the high profile given to medical diagnoses at the early industrial inquiries served to divert attention from more tangible causes of industrial ill-health and injury.