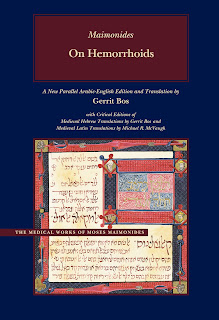 Gerrit Bos, and Michael R. McVaugh
Moshe ben Maimon, better known as Moses Maimonides, is among the most celebrated rabbis in the history of Judaism, and the author of works in Arabic on many subjects, including influential philosophical and medical treatises. On Hemorrhoids is one of these texts, written for a young man of a noble family who was seeking a regimen to help him treat his hemorrhoids. While not the first to write on this subject, Maimonides's work bears his personal stamp with his emphasis on dietetics, which plays a primary role in so many of his other medical writings.He warns against hastily treating the painful condition with drastic measures such as bleeding and surgery, instead encouraging more cautious treatments like a change in diet. He also advises his patient that if more extreme actions need to be taken, then Maimonides himself must be present.Unlike other modern editions of this important work, this edition of On Hemorrhoids takes into account all the extant Arabic and Judeo-Arabic manuscripts.The book includes critical editions of medieval Hebrew and Latin translations and a glossary of medical terms.
Publié par Alexandre Klein à 06:49