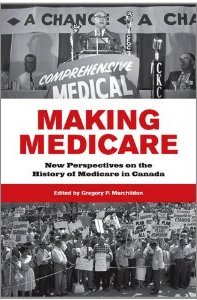 Making Medicare: New Perspectives on the History of Medicare in Canada


Gregory P. Marchildon is Canada Research Chair in Public Policy and Economic History and a professor in the Johnson-Shoyama School of Public Policy at the University of Regina. He is also the author of Health Systems in Transition (UTP/WHO).


The Canadian health care system is so indisputably tied to our national identity that its founder, Tommy Douglas, was voted the greatest Canadian of all time in a CBC television contest. However, very little has been written to date on how Medicare as we know it was developed and implemented. This collection fills a serious gap in the existing literature by providing a comprehensive policy history of Medicare in Canada.
Making Medicare features explorations of the experiments that predated the federal government’s decision to implement the Saskatchewan health care model, from Newfoundland’s cottage hospital system to Bennettcare in British Columbia. It also includes essays by key individuals (including health practitioners and two premiers) who played a role in the implementation of Medicare and the landmark Royal Commission on Health Services. Along with political scientists, policy specialists, medical historians, and health practitioners, this collection will appeal to anyone interested in the history and legacy of one of Canada’s most visible and centrally important institutions.
Publié par Alexandre Klein à 06:51