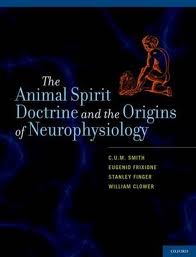 The Animal Spirit Doctrine and the Origins of Neurophysiology

Chris Smith holds degrees in Zoology, Physics and Biophysics and a PhD in Neuroscience.
Eugenio Frixione is a cell physiologist who has published mainly experimental basic research on several mechanisms of cell motility in neural and epithelial tissues, and in unicellular parasites.
Stanley Finger first studied recovery from brain damage and then turned to the history of the neurosciences.
Will Clower is trained in neurophysiology, studying the mechanisms of movement control associated with motor learning.

How do we become aware of things and events in the outside world, and how does the brain control the muscular system and behavior? This book examines the history of Western attempts to explain how messages might be sent from the sense organs to the brain and from the brain to the muscles. It focuses on a construct called animal spirit, which would permeate philosophy and guide physiology and medicine for over two millennia.

The authors' story opens along the Eastern Mediterranean, where they examine how Pre-Socratic philosophers related the soul to air-wind or pneuma. They then trace what Hippocrates, Plato and Aristotle wrote about this pneuma, and how Stoic and Epicurean philosophers approached it. They also visit Alexandria, where Hellenistic anatomists provided new thoughts about the nerves and the ventricles. Thereafter, the authors return to the Greek mainland, where they show how Galen's pneuma psychikon or spiritus animae would provide an explanation for sensations and movements.

Galen's writings would guide science and medicine for well over a thousand years, albeit with some modifications. One change, found in early Christian writers Nemesius and Augustine, involved assigning perception, cognition, and memory to different spirit-filled ventricles. After examining how pious Scholastics later dealt with the nerve spirit, the authors turn to how questions began to be raised about it in the 1500s and 1600s. Here they examine the rise of modern science with its revealing experiments, microscopic observations, and attempts to break with the past. Descartes, Swammerdam, Borelli, Glisson, Willis, Newton, Hartley, Boerhaave and Haller are among the featured players in this part of the story.

Nevertheless, the animal spirit doctrine continued to survive (although modified), because no adequate replacement for it was immediately forthcoming. The replacement theory stemmed from experiments on electric fishes started in the 1750s. Additional research on these fishes and then on frogs eventually led scientists to abandon their time-honored ideas. The authors trace some of the developments leading to modern electrophysiology and end with an epilogue centered on what this history teaches us about paradigmatic changes in the life sciences.
Publié par Alexandre Klein à 07:41