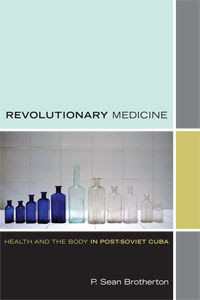 Revolutionary Medicine: Health and the Body in Post-Soviet Cuba

Revolutionary Medicine is a richly textured examination of the ways that Cuba's public health care system has changed during the past two decades and of the meaning of those changes for ordinary Cubans. Until the Soviet bloc collapsed in 1989, socialist Cuba encouraged citizens to view access to health care as a human right and the state's responsibility to provide it as a moral imperative. Since the loss of Soviet subsidies and the tightening of the U.S. economic embargo, Cuba's government has found it hard to provide the high-quality universal medical care that was so central to the revolutionary socialist project. In Revolutionary Medicine, P. Sean Brotherton deftly integrates theory and history with ethnographic research in Havana, including interviews with family physicians, public health officials, research scientists, and citizens seeking medical care. He describes how the deterioration of health and social welfare programs has led Cubans to seek health care through informal arrangements, as well as state-sponsored programs. Their creative, resourceful pursuit of health and well-being provides insight into how they navigate, adapt to, and pragmatically cope with the rapid social, economic, and political changes in post-Soviet Cuba.
Publié par Alexandre Klein à 10:10