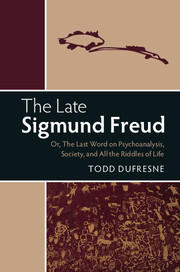 The Late Sigmund Freud. Or, The Last Word on Psychoanalysis, Society, and All the Riddles of Life

Freud is best remembered for two applied works on society, The Future of an Illusion and Civilization and its Discontents. Yet the works of the final period are routinely denigrated as merely supplemental to the earlier, more fundamental 'discoveries' of the unconscious and dream interpretation. In fact, the 'cultural Freud' is sometimes considered an embarrassment to psychoanalysis. Dufresne argues that the late Freud, as brilliant as ever, was actually revealing the true meaning of his life's work. And so while The Future of an Illusion, Civilization and its Discontents, and his final work Moses and Monotheism may be embarrassing to some, they validate beliefs that Freud always held - including the psychobiology that provides the missing link between the individual psychology of the early period and the psychoanalysis of culture of the final period. The result is a lively, balanced, and scholarly defense of the late Freud that doubles as a major reassessment of psychoanalysis of interest to all readers of Freud.
Publié par Alexandre Klein à 05:59