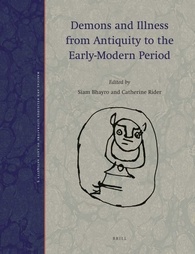 Demons and Illness from Antiquity to the Early-Modern Period

Edited by Siam Bhayro and Catherine Rider, University of Exeter

In many near eastern traditions, including Christianity, Judaism and Islam, demons have appeared as a cause of illness from ancient times until at least the early modern period. This volume explores the relationship between demons, illness and treatment comparatively. Its twenty chapters range from Mesopotamia and ancient Egypt to early modern Europe, and include studies of Judaism, Christianity and Islam. They discuss the relationship between ‘demonic’ illnesses and wider ideas about illness, medicine, magic, and the supernatural. A further theme of the volume is the value of treating a wide variety of periods and places, using a comparative approach, and this is highlighted particularly in the volume’s Introduction and Afterword. The chapters originated in an international conference held in 2013