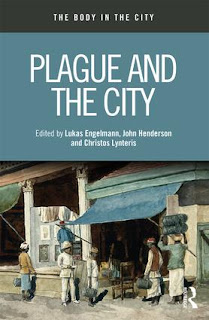 Plague and the City

Plague and the City uncovers discourses of plague and anti-plague measures in the city during the medieval, early modern and modern periods, and explores the connection between plague and urban environments including attempts by professional bodies to prevent or limit the outbreak of epidemic disease.

Bringing together leading scholars of plague working across different historical periods, this book provides an inter-disciplinary study of plague in the city across time and space. The chapters cover a wide range of periods, geographical locations and disciplinary approaches but all seek to answer significant questions, including whether common motives can be identified, and how far knowledge about plague was based on an understanding of the urban space. It also examines how maps and photographs contribute to understanding plague in the city through exploring the ways in which the relationship between plague and the urban environment has been visualised, from the poisoned darts of plague winging their way towards their victims in the votive pictures from the Renaissance, to the mapping of the spread of disease in late nineteenth-century Bombay and photographing Honolulu’s great plague fire in 1900.

Containing a series of studies that illuminate plague’s urban connection as a key social and political concern throughout history, Plague and the City is ideal for students of early modern history, and of the early modern city and plague more specifically.
Publié par Alexandre Klein à 06:08