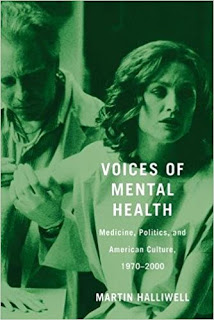 This dynamic and richly layered account of mental health in the late twentieth century interweaves three important stories: the rising political prominence of mental health in the United States since 1970; the shifting medical diagnostics of mental health at a time when health activists, advocacy groups, and public figures were all speaking out about the needs and rights of patients; and the concept of voice in literature, film, memoir, journalism, and medical case study that connects the health experiences of individuals to shared stories.

Together, these three dimensions bring into conversation a diverse cast of late-century writers, filmmakers, actors, physicians, politicians, policy-makers, and social critics. In doing so, Martin Halliwell’s Voices of Mental Health breaks new ground in deepening our understanding of the place, politics, and trajectory of mental health from the moon landing to the millennium.
Publié par Alexandre Klein à 03:55