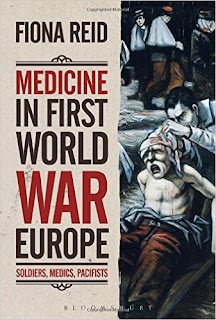 
Resulting from my deep interest in the relationship between war and medicine, especially the First World War, I have read quite a number of books on the subject. Fiona Reid's Medicine in First World War Europe definitely ranks among the best, also because of the attention to the far too often neglected, but highly interesting and important phenomenon of medical pacifism. Leo van Bergen, Dutch Veterans Institute/Netherlands Institute for Military History, The Netherlands Fiona Reid's wonderful work uncovers the fascinating and often hidden histories of the medical experience during the First World War. By focusing on personal experiences in Britain, Germany and France, she shows us that whilst the exigencies of industrial warfare were paramount, medicine in wartime was shaped and negotiated by both the individual and the personal, by both the carer and the patient. Reid shows us that the results were messy and complex, but always compelling Wendy Gagen, Independent Scholar, UK Medicine in First World War Europe is an important addition to the growing literature on First World War medical services. Fiona Reid introduces the key questions and ideas relating to this vital area of First World War studies, supporting her narrative and analysis with thoughtfully selected further reading lists. This is a must read for undergraduates or postgraduates studying the history of medicine in modern Europe or the social and cultural history of the First World War. Jessica Meyer, University Academic Fellow in Legacies of War, University of Leeds, UK
Publié par Alexandre Klein à 06:01