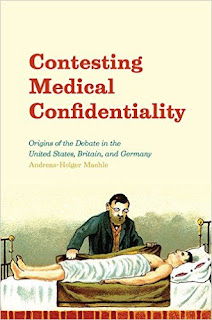 Contesting Medical Confidentiality: Origins of the Debate in the United States, Britain, and Germany

Medical confidentiality is an essential cornerstone of effective public health systems, and for centuries societies have struggled to maintain the illusion of absolute privacy. In this age of health databases and increasing connectedness, however, the confidentiality of patient information is rapidly becoming a concern at the forefront of worldwide ethical and political debate.

In Contesting Medical Confidentiality, Andreas-Holger Maehle travels back to the origins of this increasingly relevant issue. He offers the first comparative analysis of professional and public debates on medical confidentiality in the United States, Britain, and Germany during the late nineteenth and early twentieth centuries, when traditional medical secrecy first came under pressure from demands of disclosure in the name of public health. Maehle structures his study around three representative questions of the time that remain salient today: Do physicians have a privilege to refuse court orders to reveal confidential patient details? Is there a medical duty to report illegal procedures to the authorities? Should doctors breach confidentiality in order to prevent the spread of disease? Considering these debates through a unique historical perspective, Contesting Medical Confidentiality illuminates the ethical issues and potentially grave consequences that continue to stir up public debate.
Publié par Alexandre Klein à 06:03