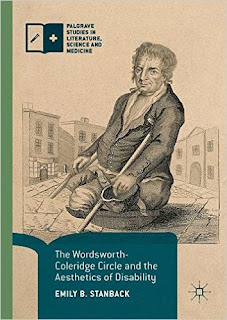 The Wordsworth-Coleridge Circle and the Aesthetics of Disability


This book argues for the importance of disability to authors of the Wordsworth-Coleridge circle. By examining texts in a variety of genres ― ranging from self-experimental medical texts to lyric poetry to metaphysical essays ― Stanback demonstrates the extent to which non-normative embodiment was central to Romantic-era thought and Romantic-era aesthetics. The book reassesses well-known literary and medical works by such authors as William Wordsworth, Samuel Taylor Coleridge, and Humphry Davy, argues for the importance of lesser-studied work by authors including Charles Lamb and Thomas Beddoes, and introduces significant unpublished work by Tom Wedgwood.
Publié par Alexandre Klein à 06:20