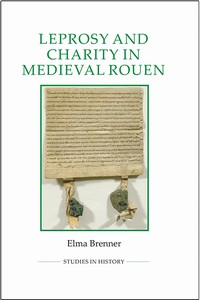 Leprosy and Charity in Medieval Rouen

Between the twelfth and fifteenth centuries, Rouen was one of the greatest cities in Western Europe. The effective capital of the 'Angevin Empire' between 1154 and 1204 and thereafter a leading city in the realm of the Capetian and Valois kings of France, it experienced substantial growth, the emergence of communal government and the ravages of plague and the Hundred Years' War.
This book examines the impact of leprosy upon Rouen during this period, and the key role played by charity in the society and religious culture of the city and its hinterland. Based upon extensive archival research, and focusing in particular on Rouen's leper houses, it offers a new understanding of responses to disease and disability in medieval Europe. It charts how attitudes towards lepers, and perceptions of their disease, changed over time, explores the relationship between leprosy, charity and practices of piety, and considers how leprosy featured in growing concerns about public health. It also sheds important new light on the roles and experiences of women, as both charitable patrons and leprosy sufferers, and on medical practice and practitioners in medieval France.