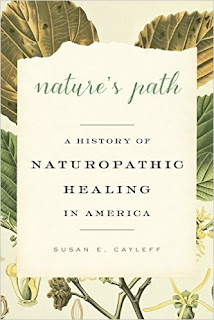 Nature's Path: A History of Naturopathic Healing in America

While early naturopaths were sometimes divided by infighting, they all believed in the healing properties of water, nutrition, exercise, the sun, and clean, fresh air. Their political activism was vital to their professional formation: they loathed the invasive, depletive practices of traditional medicine and protested against medical procedures that addressed symptoms rather than disease causes while resisting processed foods, pharmaceuticals, environmental toxins, and atomic energy. Cayleff describes the development of naturopathy’s philosophies and therapeutics and details the efforts of its proponents to institutionalize the field. She recognizes notable naturopathic leaders, explores why women doctors, organizers, teachers, and authors played such a strong role in the movement, and identifies countercultural views―such as antivivisection, antivaccination, and vegetarianism―held by idealistic naturopaths from 1896 to the present.

Nature’s Path tracks a radical cultural critique, medical system, and way of life that links body, soul, mind, and daily purpose. It is a must-read for historians of medicine and scholars in women’s studies and political history, as well as for naturopaths and all readers interested in alternative medicine.
Publié par Alexandre Klein à 06:02