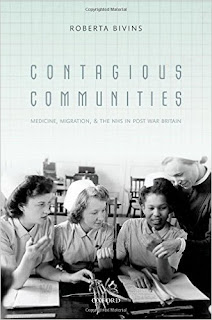 
It was only a coincidence that the NHS and the Empire Windrush (a ship carrying 492 migrants from Britain's West Indian colonies) arrived together. On 22 June 1948, as the ship's passengers disembarked, frantic preparations were already underway for 5 July, the Appointed Day when the nation's new National Health Service would first open its doors. The relationship between immigration and the NHS rapidly attained - and has enduringly retained - notable political and cultural significance.
Both the Appointed Day and the post-war arrival of colonial and Commonwealth immigrants heralded transformative change. Together, they reshaped daily life in Britain and notions of 'Britishness' alike. Yet the reciprocal impacts of post-war immigration and medicine in post-war Britain have yet to be explored. Contagious Communities casts new light on a period which is beginning to attract significant historical interest. Roberta Bivins draws attention to the importance - but also the limitations - of medical knowledge, approaches, and professionals in mediating post-war British responses to race, ethnicity, and the emergence of new and distinctive ethnic communities. By presenting a wealth of newly available or previously ignored archival evidence, she interrogates and re-balances the political history of Britain's response to New Commonwealth immigration. Contagious Communities uses a set of linked case-studies to map the persistence of 'race' in British culture and medicine alike; the limits of belonging in a multi-ethnic welfare state; and the emergence of new and resolutely 'unimagined' communities of patients, researchers, clinicians, policy-makers, and citizens within the medical state and its global contact zones.
Publié par Alexandre Klein à 06:11