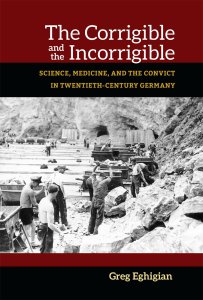 The Corrigible and the Incorrigible: Science, Medicine, and the Convict in 20th Century Germany

The Corrigible and the Incorrigible explores the surprising history of efforts aimed at rehabilitating convicts in 20th-century Germany, efforts founded not out of an unbridled optimism about the capacity of people to change, but arising from a chronic anxiety about the potential threats posed by others. Since the 1970s, criminal justice systems on both sides of the Atlantic have increasingly emphasized security, surveillance, and atonement, an approach that contrasts with earlier efforts aimed at scientifically understanding, therapeutically correcting, and socially reintegrating convicts. And while a distinction is often drawn between American and European ways of punishment, the contrast reinforces the longstanding impression that modern punishment has played out as a choice between punitive retribution and correctional rehabilitation. Focusing on developments in Nazi, East, and West Germany, The Corrigible and the Incorrigible shows that rehabilitation was considered an extension of, rather than a counterweight to, the hardline emphasis on punishment and security by providing the means to divide those incarcerated into those capable of reform and the irredeemable.
Publié par Alexandre Klein à 06:07