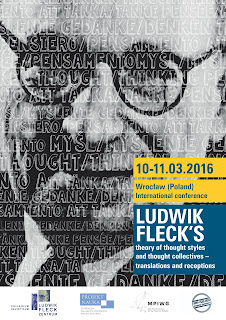 In 1935 the then unknown Polish doctor and microbiologist Ludwik Fleck (1896-1961) published in German a book in the field of philosophy of science under the long title Entstehung und Entwicklung einer wissen-schaftlichen Tatsache: Einführung in die Lehre vom Denkstil und Denk-kollektiv. It provoked a couple of reviews, but due to historical circumstances – World War II, the Soviet and German occupation of Poland, the Holocaust and Fleck’s deportation to Auschwitz – in the beginning it did not receive a thorough reception. The book was eventually received with great enthusiasm – but only two decades after Fleck had died. In 1979, the University of Chicago Press published an English translation of his book. In the context of the reception of Thomas Kuhn’s pioneering study on scientific revolutions, Fleck was suddenly understood as a previously-unknown forerunner to social constructivist epistemology. The translation of the 150 pages had taken more than five years, and it turned out to be a cumbersome process that occupied several translators and editors. Hints can be found in the preface and introduction of the book where the editors complained about Fleck’s “idiosyncratic” and “complicated” German. Obviously these problems did not foreclose further translations. Meanwhile, Italian (1983), Polish (1986), Spanish (1986), Swedish (1997), Russian (1999), French (2005) and Portuguese (2010) translations of the book have been published with prefaces or afterwords contributed by influential scholars such as Thomas Kuhn, Bruno Latour or Paolo Rossi. Unfortunately, there is still very little knowledge about the initial reception and the process of translating Fleck’s texts, especially in the languages listed above, and in countries outside of Europe and the USA. This is the reason why we would like:
We would like to address an international public of scholars to compare and correlate the different local receptions.
Translators as well as theoreticians of translation are welcome to talk about specific problems of translating the legacy of Ludwik Fleck.
We particularly invite focused presentations about specific moments, authors and institutions to promote Fleck’s thought most prominently. Such focus may also be dedicated to the kind of journal articles on Fleck that were published (medical, philosophical, sociological etc.). Presenters may also highlight important controversies about or around Fleck. Discussions of applications of Fleck’s theory in concrete research are welcome, as are arguments about important concepts beyond “thought style and thought collective” adopted from Fleck or yet to be adopted. Also, contributions to (unknown) parts of Fleck’s biography are most appreciated. The conference aims to provide a platform for preparing, sharing, discussing and completing the bibliography of branches of reception concerning languages, nations, etc. Last but not least, a listing of all known translations of Fleck’s
own texts is targeted.

Talks on these foci are of priority, but the organizing committee will also consider other presentations related to Fleck.
Our long-term plan is to publish a new collected edition of Fleck’s writings in English in 2019, 40 years after the publication of the first American edition of Fleck’s book.

Important information:
Deadline for abstracts: 2 November, 2015
Notification of acceptance: 2 December, 2015
Language of the conference: English
To submit an abstract, please send 1) your abstract (max. 300-500 words) and 2) a short bio (max. 300 words) to  pawel.jarnicki@projekt-nauka.com by 2 November, 2015.


Confirmed speakers:
Mauro Condé (Brasil) - THE RECEPTION OF LUDWIK FLECK IN BRAZIL: FROM AN ANONYMOUS VISITOR TO A RENOWNED THINKER

Ilana Löwy (France) - FLECK AND THE ETHICS OF SCIENTIFIC INQUIRY