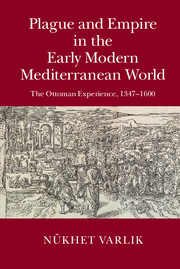 Plague and Empire in the Early Modern Mediterranean World. The Ottoman Experience, 1347–1600

This is the first systematic scholarly study of the Ottoman experience of plague during the Black Death pandemic and the centuries that followed. Using a wealth of archival and narrative sources, including medical treatises, hagiographies, and travelers' accounts, as well as recent scientific research, Nükhet Varlik demonstrates how plague interacted with the environmental, social, and political structures of the Ottoman Empire from the late medieval through the early modern era. The book argues that the empire's growth transformed the epidemiological patterns of plague by bringing diverse ecological zones into interaction and by intensifying the mobilities of exchange among both human and non-human agents. Varlik maintains that persistent plagues elicited new forms of cultural imagination and expression, as well as a new body of knowledge about the disease. In turn, this new consciousness sharpened the Ottoman administrative response to the plague, while contributing to the makings of an early modern state.
Publié par Alexandre Klein à 07:15