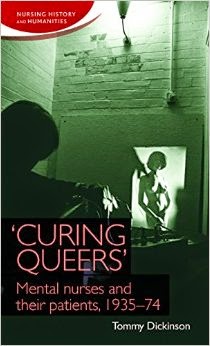 
Drawing on a rich array of source materials including previously unseen, fascinating (and often quite moving) oral histories, archival and news media sources, 'Curing queers' examines the plight of men who were institutionalised in British mental hospitals to receive 'treatment' for homosexuality and transvestism, and the perceptions and actions of the men and women who nursed them.

The book begins in 1935 with the first official report on the use of aversion therapy to combat homosexual desire and continues until 1974, when the American Psychiatric Association removed homosexuality from its diagnostic manual as a category of psychiatric disorder. It thereby covers a critical period in British queer history during which the reigning public and professional discourse surrounding homosexuality shifted from crime to sickness to tolerance. The majority of nurses followed orders in administering treatment in spite of the zero success-rate in 'straightening out' queer men, but a small number surreptitiously defied their superiors by engaging in fascinating subversive behaviours. This book provides an in-depth examination of both groups, and offers some intriguing insights into the hidden gay lives of some of the nurses themselves, and the inevitable tension between their own identities and desires and the treatments they administered to others.

'Curing queers' makes a significant and substantial contribution to the history of nursing and the history of sexuality, bringing together two sub-disciplines that combine only infrequently. Therefore, it will be of interest to scholars and students in nursing, history, gender studies, health care ethics and law, as well as the general reader.
Publié par Alexandre Klein à 06:08