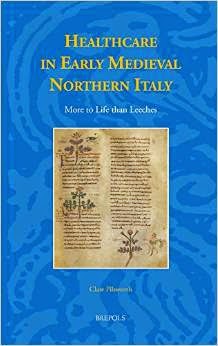 
After the fall of the last Western Roman Emperor in 476 AD, Northern Italy played a crucial role - both geographically and culturally - in connecting East to West and North to South. Nowhere is this revealed more clearly than in the knowledge and practice of medicine. In sixth-century Ravenna, Greek medical texts were translated into Latin, and medical practitioners such as Anthimus, famous for his work on diet, also travelled from East to West. Despite Northern Italy's location as a confluence of cultures and values, modern scholarship has thus far ignored the extensive range of medical practices in existence throughout this region. This book aims to rectify this absence. It will draw upon both archaeological and written sources to argue for redefinitions of health and illness in relation to the Northern-Italian Middle Ages. This volume does not only put forward new classifications of illness and understandings of diet, but it also demonstrates the centrality of medicine to everyday life in Northern Italy. Using charter evidence and literary sources, the author expands our understanding of the literacy levels and social circles of the elite medical practitioners, the medici, and their lesser counterparts. This work marks a significant intervention into the field of medical studies in the early to high Middle Ages.
Publié par Alexandre Klein à 06:03