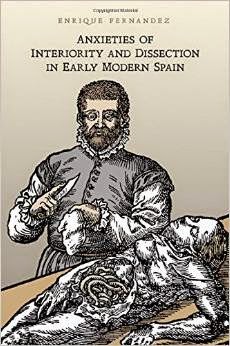 Anxieties of Interiority and Dissection in Early Modern Spain


Anxieties of Interiority and Dissection in Early Modern Spain brings the study of Europe’s “culture of dissection” to the Iberian peninsula, presenting a neglected episode in the development of the modern concept of the self. Enrique Fernandez explores the ways in which sixteenth and seventeenth-century anatomical research stimulated both a sense of interiority and a fear of that interior’s exposure and punishment by the early modern state.
Examining works by Miguel de Cervantes, María de Zayas, Fray Luis de Granada, and Francisco de Quevedo, Fernandez highlights the existence of narratives in which the author creates a surrogate self on paper, then “dissects” it. He argues that these texts share a fearful awareness of having a complex inner self in a country where one’s interiority was under permanent threat of punitive exposure by the Inquisition or the state. A sophisticated analysis of literary, religious, and medical practice in early modern Spain, Fernandez’s work will interest scholars working on questions of early modern science, medicine, and body politics.
Publié par Alexandre Klein à 06:02