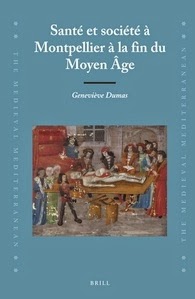 This book examines the social, institutional and cultural setting of medical practices in the medieval town of Montpellier which boasted one of the first universities of the middle ages and a famous school of medicine. Some of its most celebrated masters and their medical works have been thoroughly studied but few of them try to put these in context with a thriving urban community of merchants and craftsmen that were at the core of the city council. Their concurrent efforts will endow Montpellier of a rich health care system featuring not only the university masters but also the city’s barber-surgeons and apothecaries. Their collective fate is revealed here in an integrated picture of health and society in the middle ages.
Publié par Alexandre Klein à 00:05