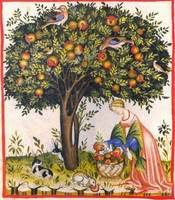 · Betson's English and Latin list of Plants and Remedies. Bibliography and Index.

· Plants listed at Syon House in 1549 by William Turner, Herbalist.


The Syon Abbey Herbal was written by Thomas Betson in his notebook, sometime between his profession in 1481 as a priest-brother at the Bridgettine double monastery of Syon Abbey near London, and his death there in 1517. He is the last recorded Librarian at Syon, and also wrote the still extant Syon Abbey library catalogue or Registrum.

Syon had one of the best late mediaeval medical libraries in both Britain and Europe. It contained several hundred medical and medical-astrology titles, many unique in Britain to Syon. Almost all of the 1747 volumes in Betson's library are now lost.

The Syon Abbey Herbal is divided into two main parts - a list of healing plants from Greek, Latin , French and Middle English sources; and a list of remedies from Latin and English sources. One chapter, wholly in Latin, is on the use of urine for diagnosis, particularly of women's conditions; another is on herbal essences in distilled alcohol. This book is a useful contribution to the study of the transition from mediaeval to early modern medicine.