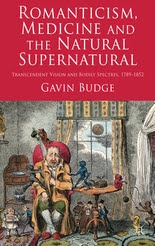 GAVIN BUDGE is a senior lecturer in English Literature at the University of Hertfordshire, UK. He is the author of Charlotte M Yonge: Religion, Feminism and Realism in the Victorian Novel (Lang 2007), and editor of a collection of essays, Romantic Empiricism: Poetics and the Philosophy of Common Sense

Romanticism, Medicine and the Natural Supernatural explores the relationship between the Romantic preoccupation with visionary kinds of experience and early nineteenth-century medical theories of hallucination and the nerves, placing it in the context of accounts of perception in philosophical empiricism. Starting with an examination of Ann Radcliffe's Gothic narrative, and the canonical Romanticism of Wordsworth and Coleridge, the book goes on to examine the persistence of this medical topos of hallucination and the visionary in mid nineteenth-century writers influenced by Romanticism, such as Harriet Martineau and Harriet Beecher Stowe. The book concludes with a discussion of how the pathological language employed in early debates about Pre-Raphaelite painting reflects this Romantic conception of the interrelationship between nervous strain, hallucination and vision.
Publié par Alexandre Klein à 06:44